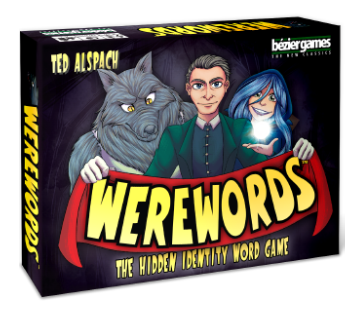 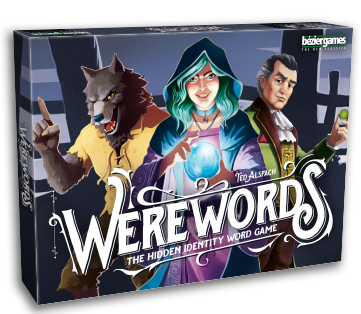 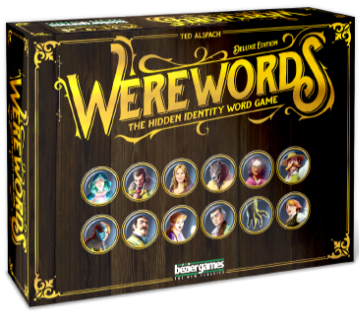 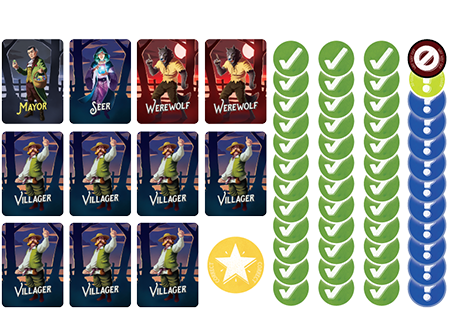 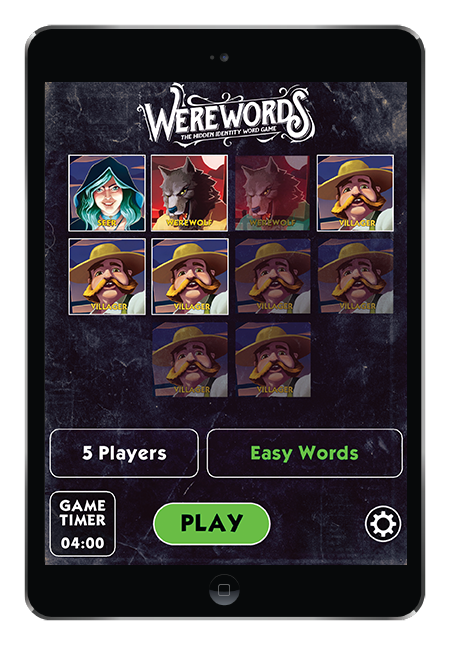 Install the Werewords app on your iOS or Android mobile device (go to beziergames.com to get the app).

The Werewords app walks you through the Night Phase of the game, providing the Magic Word to the Mayor, Seer, and Werewolf. It also includes timers for guessing the Magic Word and for discussion prior to voting.

Open the app and select the roles you want to use on the main screen. A role with a square frame around it is selected (the Mayor is always in play, and does not need to be selected in the app). The number of players is indicated in the leftmost button above the Play button (tap this to quickly increase or decrease player count).

The Game Timer button indicates how much time players have to figure out the Magic Word. Tap and hold this to adjust the time.

Tap the Gear button to:

The Werewords app will be updated occasionally with new features, updated word lists, and more, so be sure to use the latest version of the app when you play. 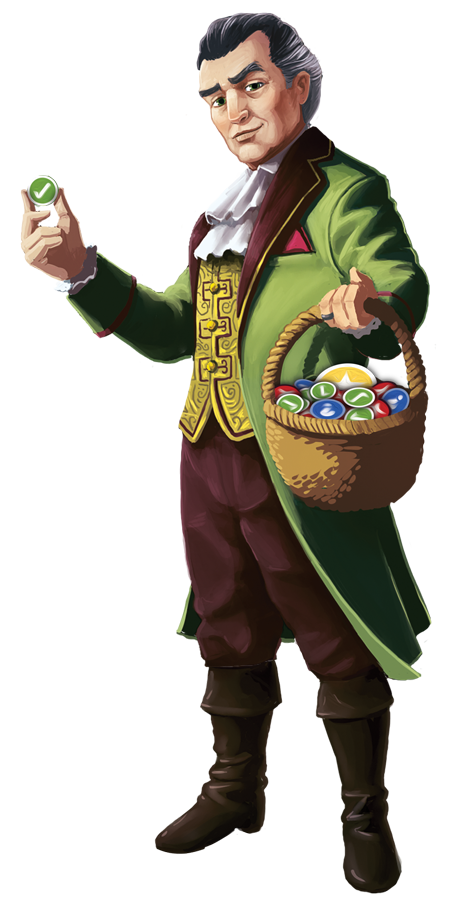 The player with the Mayor card reveals his card, then takes the center card and looks at it secretly—this is the Mayor’s secret role. He places the box with the tokens in front of himself.

Finally, he places the mobile device near enough for him to reach it, but still as close as possible to the other players. 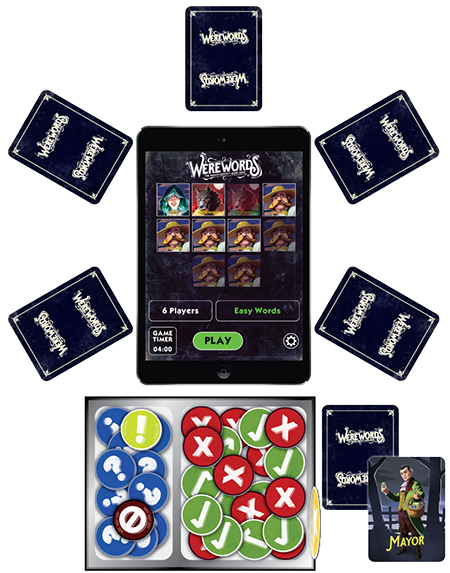 If no player has the Mayor card, the player to the left of the last Mayor takes the center card (which is the Mayor card) and reveals it. If this is the first game, redeal the cards until one player gets the Mayor card.

To start the game, the Mayor presses the Play button on the app. The app tells all players to close their eyes. Then it tells the Mayor to wake up and tap his secret role. The Mayor opens his eyes and taps his secret role (such as a Villager, Werewolf, or Seer) in the app. 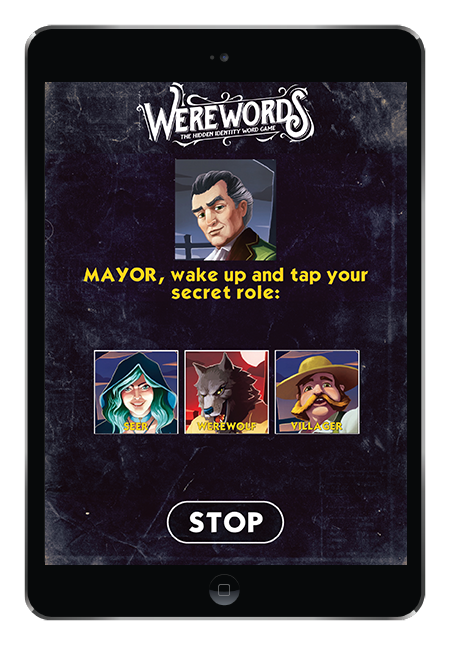 Next, the Mayor chooses a Magic Word from the options shown. The Mayor should choose a Word that he thinks the players will be able to guess. 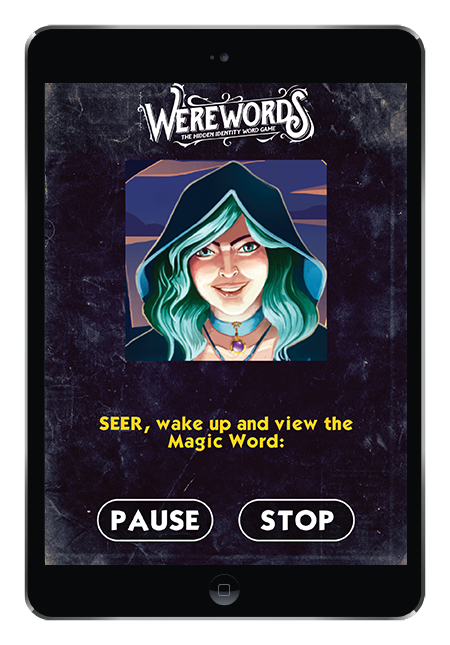 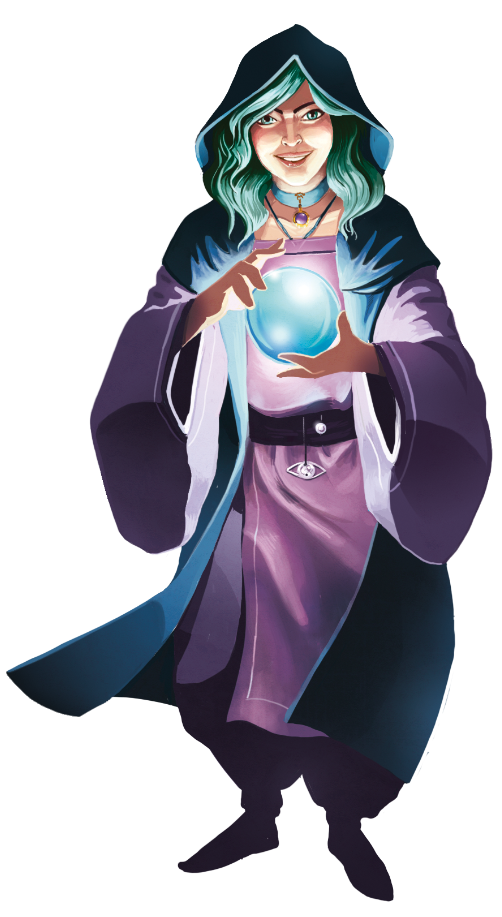 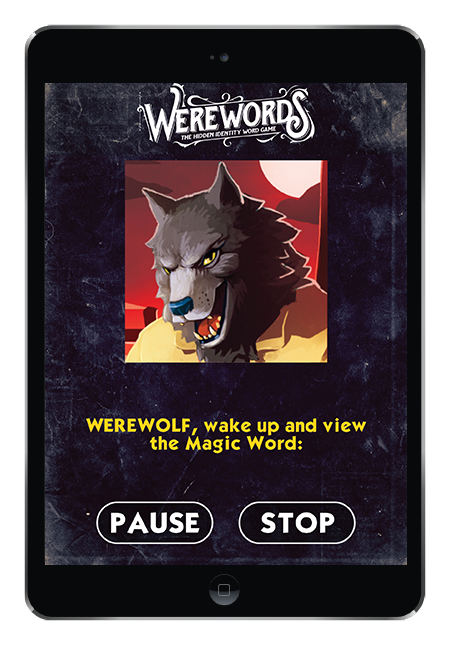 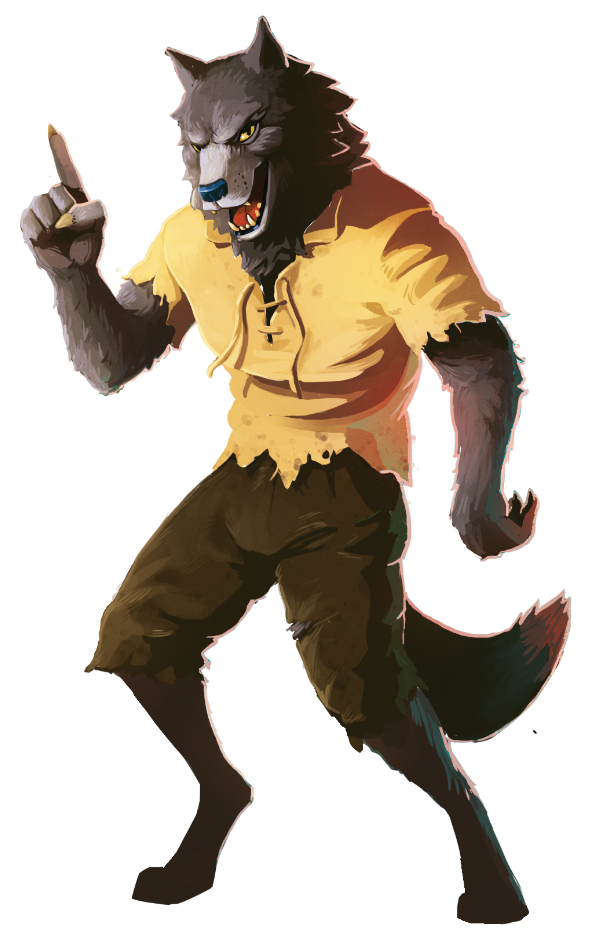 The app then tells everyone to wake up and starts the timer for the Day Phase. 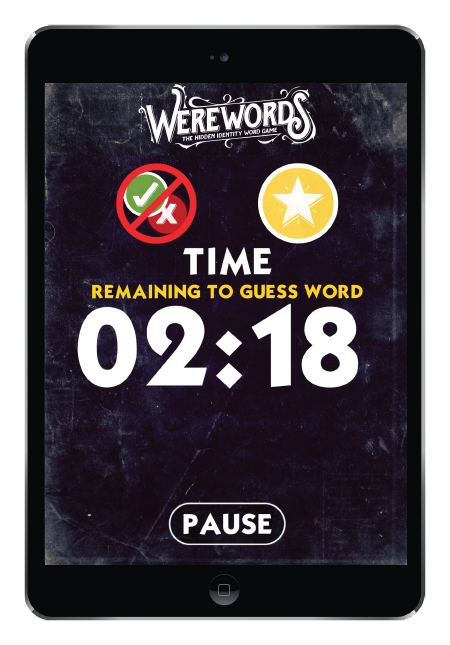 While the timer is running, all the players try to figure out the Magic Word.

The players do this by asking the Mayor questions that require a “yes” or “no” answer. The Mayor may not speak; instead, he must give the person who asked the question an answer token:

)—with the appropriate side up, Maybe (

The Mayor may not point at any players or tokens, or speak until time runs out or the Magic Word has been guessed. The Mayor may not ignore questions posed to him even if they have been previously asked. If the players are way, way off track (maybe they’ve interpreted an answer poorly or they think they’re very close when they aren’t), the Mayor may place the Way Way Off (

) token in the middle of the table to indicate that they are indeed way, way off. This token may go to a specific player, but does not take the place of a regular Yes/No ( 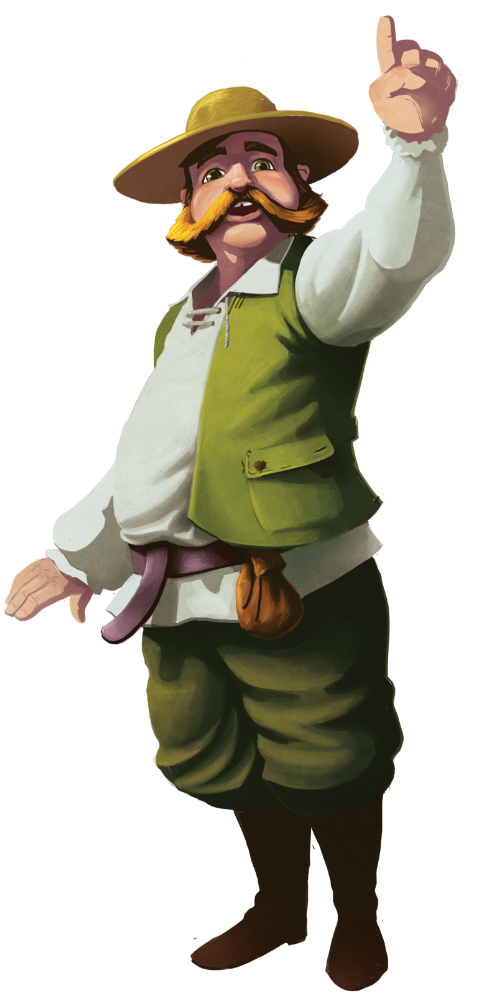 Players may speak to each other during the Day Phase, and can even ask each other questions before posing them to the Mayor. Only one question should be asked of the Mayor at a time. The Mayor may not speak at all, even to verify a previous question and answer. Players (including the Mayor) may not look up the Magic Word or consult with anything or anyone outside the game regarding the Magic Word until the Day Phase is over. The tokens are limited—when the last Yes/No (

) token is given to a player, the Day Phase is over and the Mayor must tap the No More Yes/No Tokens button on the app. 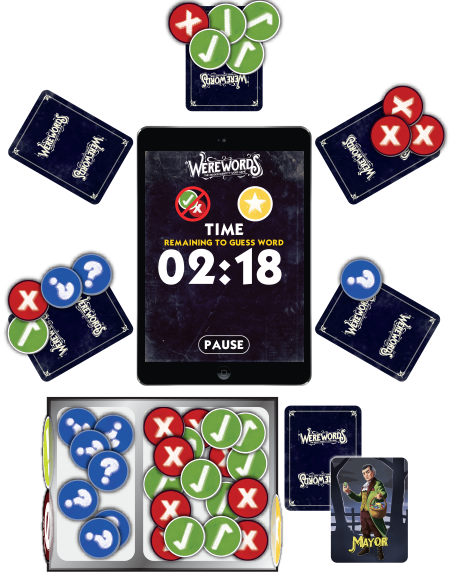 To guess correctly, players must directly ask the complete Word. (e.g., “Is the word ‘frog’?”; “Is it ‘frog’?”) An indirect guess, even if it includes the Magic Word (e.g., “Is it a kind of frog?”), is not correct. The Mayor might want to use the So Close (

) token in this case.

If The Magic Word is Guessed Correctly

If the players guess correctly before time runs out, the Mayor taps the yellow Correct (

) button on the app, and then hands the Correct (

) token to the player who guessed correctly. 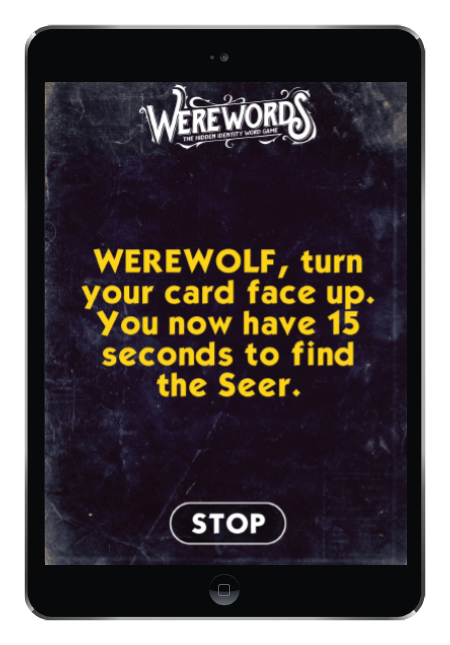 After a correct guess, only the Werewolf shows his card. The Werewolf then has one last chance to win if he can guess who the Seer is.

During this time, all players, including the Mayor, may say anything they’d like to, including what their secret role is. Players are allowed to lie about what their role really is. No one may reveal their role card until after the vote.

The Werewolf has just 15 seconds to decide. Then he must point at a player, who turns over their role card. 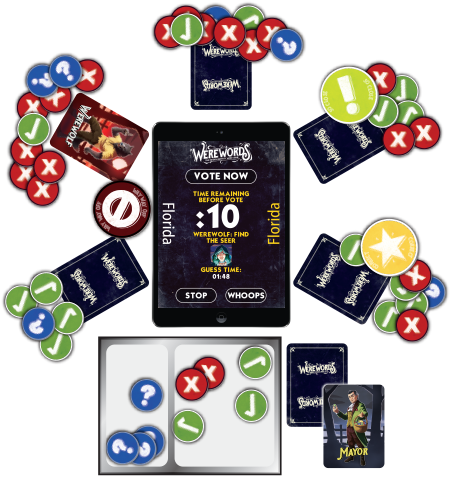 If No One Guesses the Magic Word

If the players don’t guess the Magic Word before time runs out or the No More Tokens button is tapped, players have one minute to discuss among themselves who they think the Werewolf is.

When this discussion starts, players (including the Mayor, who is now allowed to speak) may claim to be certain roles (whether they are that role or not), but may not reveal their cards until the final vote has taken place. 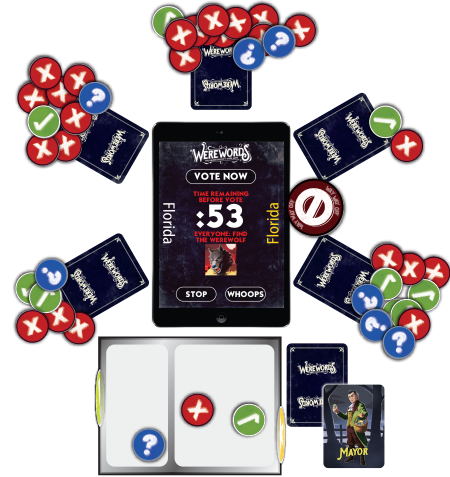 When the minute is up, everyone points at the player they think is the Werewolf (you may not point at yourself). The player with the most votes must reveal their card.

Either way, you can get things back on track by tapping the Whoops button in the lower right; this will display the other endgame condition than the one currently shown on the app.

If you want to play again quickly, tap the Play Again button on the screen that appears at the end of the game. You can also change the difficulty level on this screen. 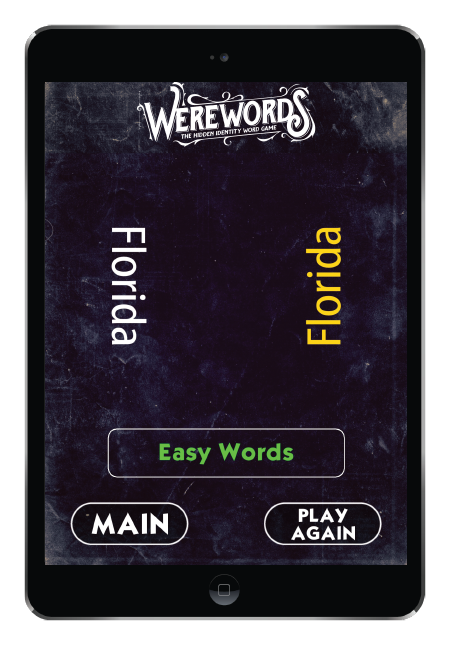 If the Mayor is a Werewolf, he doesn’t want the players to guess the Word; his winning condition is the same as any other Werewolf. In this case, the Mayor might want to choose a slightly harder Magic Word. During the Day Phase, the Werewolf-Mayor may mislead or even lie to the players when giving tokens to lead them away from the correct answer. 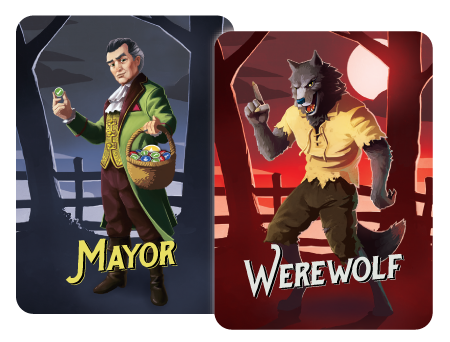 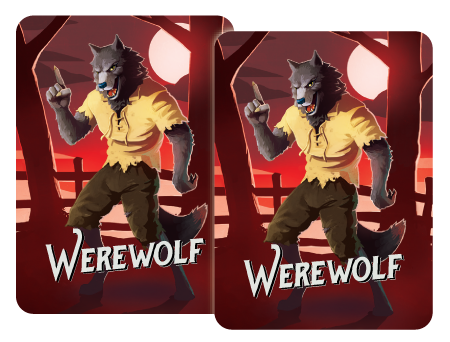 When using a second Werewolf, the app allows each Werewolf a chance to see who the other Werewolf is right before they view the Magic Word.

If the Magic Word is guessed correctly, each Werewolf may vote for a different player, and both of those players must reveal their cards—if either one is the Seer, the Werewolves win.

If the Magic Word is not guessed correctly, the players only have to find one of the two Werewolves to win. As long as either Werewolf gets the majority of votes, the village team wins and the werewolf team loses.

All village team players should pay attention to everyone who asks questions. If someone seems to be playing slowly or trying to derail the line of questioning, that person just might be a Werewolf.

The Seer has to be careful not to make her knowledge so obvious that the Werewolf will know who she is.

A Werewolf should, without making it too obvious, attempt to slow down the rate in which the group reaches their conclusion and use up tokens with questions that don’t really help the other players.

A Werewolf should also pay attention to the other players to try to spot the Seer.

You can add your own custom word lists to the Werewords app.

Word lists can be assigned any of the four difficulty levels, and you can quickly paste in word lists right on your mobile device.

Download word lists submitted by other players, all categorized by age appropriateness and difficulty level, directly into your app, and go to werewords.com to submit your own custom word lists.

The Apprentice takes over as the Seer when the Mayor is the Seer.

The Minion is on the werewolf team and doesn’t know the Magic Word, but is trying to make sure the village team doesn’t guess the Word correctly.

The Fortune Teller sees just the first few letters of each word in the Magic Word.

The Masons know each other, but don’t know the Magic Word.

The Thing (that goes bump in the night) bumps a player at night to let them know he is on the villager team.

The Beholder knows who the Seer is, but does not know the Magic Word.

The Doppelgänger looks at another player’s card, and then becomes that role for the game.

The new Speedwords™ mode plays like Hangman, where you have even less time to guess the Magic Word, but you’re given a few clues to help you out… by the Werewolves!